The Water Erosion Prediction Project (WEPP) model is a hydrology and erosion model wildly used by academics and land managers to assess the effects of land management changes on runoff and sediment yield. Even for advanced users, data preparation is a lengthy process that involves downloading various maps and datasets, and processing and saving the data in formats that are readable by the model.

WEPPcloud is an online interface for the WEPP model that facilitates input data preparation and hydrologic simulations from any computer connected to the internet. The user can zoom to a location, identify an area of interest, and delineate a watershed. Then based on a series of options that involve selection of soils, managements, and weather information from national or locally-stored databases, the user can quickly get estimates of runoff and soil erosion for their watershed of interest. Results are displayed in the web browser as text files and as geospatial maps and are also downloadable. Most hydrologic simulations can be completed within a few minutes, depending on the size of the watershed.

WEPPcloud was mainly developed for forestry applications as a joint effort between University of Idaho and Forest Service Rocky Mountain Research Station. Other contributions to the applicaiton include USDA ARS, Swansea University, and Michigan Technological University.

For technical assistance please contact Roger Lew at rogerlew@uidaho.edu. Providing the url to the run in question and a screenshot of the problem would also be helpful.

For questions regarding the WEPP model please contact Anurag Srivastava at srivanu@idaho.edu.

WEPPcloud relies on publically available databases to parameterize the necessary WEPP inputs. The various WEPPcloud interfaces are more-or-less supported in the following locales:

WEPPcloud has region specific data for some locations that are used to provide better calibration. These regions include:

WEPPcloud is comprised of numerous interfaces with sometimes subtle distinctions between them. While this helps to provide backwards compatibility the result can be confusing to users. If you are unsure of what interface to use, use the general WEPPcloud Interface or the Disturbed Interface.

The WEPPcloud-Disturbed allows users to upload a burn severity map and predict erosion based on fire severity. Optionally, the user can forgo uploading a burn severity map to model unburned conditions. It uses SSURGO to create 7778 soils and NLCD to parameterize landuse for unburned conditions. For fire and treatment conditions soils and managements are procedurally generated and parameterized from the disturbed database based on soil texture and landuse. This allowing forests, shrubs, and grass to be burned based on landuse. The parameterization is intended to provide meaningful comparisons between unburned, burned, and treatment conditions. In the long-term disturbed is envisioned to replace the WEPPcloud-PEP interface.

View 15 May 2019 USDA Forest Service Webinar: An Introduction to WEPPcloud-PEP.

Specialized tools and reports are available on some interfaces to assist with post-fire risk assessment. These tools include:

WATAR has been under developed since 2017 (Neris et al. 2017). The model predicts the probability of both ash and soil, and the potential pollutants in them, to be transported from burned hillslopes into stream channels and waterbodies and utilizes WEPP outputs.

A empirical Debris Flow model is available for the US. It is parameterized from SSURGO and uses NOAA precipitation interval data.

This interface provides a watershed scale online interface for RHEM. It parameterizes soils based on cover values obtained from the NLCD 2016 Shrubland database.

Developments such as the incorporation of baseflow algorithms and channel routing methods have extended the applicability of the model to larger watersheds. The model has been tested for several undisturbed watersheds and for forest management effects on water and sediment yield from watersheds in Pacific Northwest (Brooks et al., 2016; Srivastava et al., 2020).

Following are the brief description of model components and processes:

Watershed delineation can be performed by TOPAZ or TauDEM

WEPP first executes hydrological and erosion calculations for each hillslope and channel. The flow and sediment yield from each of the hillslopes are fed to those of the associated channel and are routed through the channels to the watershed outlet.

Several WEPP interfaces are available for different applications. The USDA Agricultural Research Service National Soil Erosion Research Lab (NSERL) is the agency the manages the model development and handles all the updates and releases (Laflen et al., 1991; Flanagan and Nearing, 1995). The WEPP Windows interface can be ran on personal computers for individual hillslopes or small agricultural catchments. For a complete list of model documentation, updates, and other information related to the WEPP model see: https://www.ars.usda.gov/midwest-area/west-lafayette-in/national-soil-erosion-research/docs/wepp/

NSERL is also the developer of an online interface for the WEPP model (Frankenberger et al., 2011), which allows the WEPP model to be set up for small watersheds and ran using a web browser: https://milford.nserl.purdue.edu/ol/wepp/verify.php

Additionally, researchers at NSERL are working on developing other online interfaces at both hillslope and watershed scales for land managers interested in evaluating the effects of runoff and erosion from various agricultural practices.

An ArcGIS version of the model (GeoWEPP, Renschler, C.S., 2003) has been developed for users that are familiar with GIS: http://geowepp.geog.buffalo.edu

GeoWEPP guides users through a series of questions that facilitate data preparation and model runs. The model is ArcMap dependent and a user needs to update GeoWEPP with every ArcMap update.

WEPPcloud is a Python Flask web interface for running WEPP (and other hydrological) models in the cloud (remote servers). WEPPcloud uses the wepppy library to acquire and process GIS data from a variety of sources. wepppy contains a scientific Python-based hillslope abstraction routine and functionality for running WEPP at the watershed scale. This eliminates the need for TopWEPP (a.k.a. TopWEPP2, prepwepp) and improves the flexibility and reliability of the process. WEPPcloud automates the delineation of hillslopes by running Digital Elevation Models (DEMs) through TOPAZ. The climates can be stochastically generated or observed daily climate input files are created with the assistance of CLIGEN. Additional climate processing functionality is available (dependent on the region) to spatialize climates on monthly gridded daily temperature minimums, maximums, and precipitations. In the US there is support for generating daily observed (historical) climate files from DAYMET or GRIDMET. 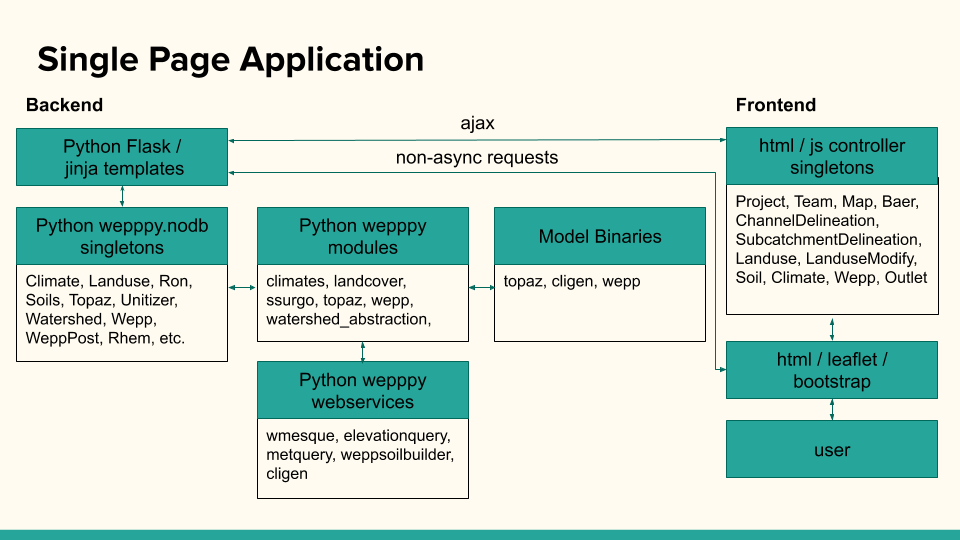